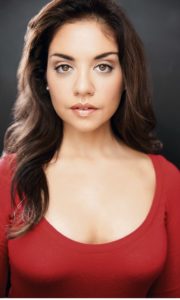 Born in Miami, Cuban-Hungarian Sandra Marante is a classically trained soprano and musical theatre actress who had a promising career ahead of her. Imagine having that potentially ripped away from you by not one, but two major setbacks. This month Marante shares her story of personal triumph and determination to never give up.

What adversity did you overcome?

My first challenge occurred in 2006 when I was 19 years old. I had recently started college and was trying to figure out which musical path I wanted to follow. I had always sung and I had the opportunity at a young age to work in the music industry and recording business at both the international and national levels.

However, fate took a turn. While on summer break from college, I was at a local Florida restaurant. As I was seated at a table and listening to a friend perform, my dress went up in flames.

Someone had placed a candle on the floor under my table, and I did not realize it until it was too late. I had second- and third-degree burns over 40 percent of my body. I ended up in intensive care and then rehab for over a year.

Although my pop music world halted abruptly, I discovered a new passion while flipping through television channels in my hospital room—opera. I became fascinated with opera documentaries and decided to earn my bachelor’s in vocal performance once I was medically cleared.

Fast forward five years later. During my last year of graduate school at Roosevelt University’s Chicago College of Performing Arts, I suffered another major setback. In the middle of rehearsal for Cendrillon, in which I was singing the title role, I had a grand mal seizure. I had never experienced seizures before and this was a terrifying moment.

The paramedics rushed me to Northwestern [Memorial] Hospital. My CT scans showed I had an arteriovenous malformation (AVM) the size of a golf ball in my brain. An AVM is a tangled mass of arteries and veins which had probably been there since birth but had grown and pressed on the temporal lobe where music, memory, language, and behavior were located.

My options were not great. No surgery meant fatality, and removal of the mass meant I may not be able to sing or speak. My surgeon never had an opera singer as a patient before, someone who studied many languages and memorized so much information, so he decided to do a study on my brain.

I listened to a wide variety of arias in different languages in a functional MRI for over six weeks. The study showed that my brain lit up all over and not just in the right temporal lobe where music registers. My surgeon said that because of this he was confident that other areas in my brain would compensate after the surgical resection. He was right!

How did it affect your singing?

Recovery from my burns was incredibly painful. I would often bleed through my bandages and I would have to take frequent breaks. My lungs also suffered from smoke inhalation, so I worked on strengthening my lungs daily in rehab. It took a full year to recover.

Brain surgery was different. I would easily fatigue learning new things and my voice was weak. I couldn’t express myself with words accurately and I didn’t remember how to use my voice at first. In a sense, I had to start over, and it took time to regain what I lost.

It took three full years before I felt like my vocal self again. Memorization was also difficult. I had to change the way I learned by taking breaks and learning smaller portions at a time. I am able now to learn and memorize faster than before my surgery.

How did your adversities affect other aspects of your life?

Recovering from my burns was a challenge both physically and emotionally. Aside from the physical pain of healing, the burns changed my outer appearance, and I had to grow comfortable with my new body. I had to accept my scars and to not feel insecure. As a teenager, this was very challenging. I tried to be confident, but I was always self-conscious.

There were many times I cried in my mother’s arms. I eventually learned that if I didn’t pay attention to my scars and didn’t try to hide them, no one else would care. Today, people hardly even notice until I bring up my story. Now I am proud of them and I wear them with dignity.

The brain surgery was more emotional and personal. I was a different person before the surgery. The closer the time came to my grand mal seizure and its actual discovery, the more abrasive I was. Now I know that the golf ball-sized mass in my brain was physically pressing on the portion of my brain that monitored behavior and impulse. That was not truly me.

After surgery, I had to get to know myself again. Others did too. I am told I am quieter, nicer, and funnier than before. It took years to recognize the “real me” for myself. It’s definitely been an adventure!

How did you overcome it?

Every step I took to get closer to a normal life of performing and singing was the step I had to take—no matter the pain, no matter the suffering. I owed it to myself, to my mother who was with me every single step, to my friends who stuck by my side throughout every ordeal, to my teachers who never gave up on me, and to my doctors who took the extra time to preserve my voice. I was thankful for them. I couldn’t give up on them, or myself, because my amazing support system of family, friends, voice teachers, and medical specialists never gave up on me.

I share my story to help others. I don’t consider myself special or different than anyone else in this career. Each of us has a story to share and challenges to endure.

We just have to keep persevering and loving ourselves completely with all our imperfections. I try to live every day with gratitude and I believe that we are capable of more than we give ourselves credit for. All it takes is one step at a time.

And one step at a time, indeed. Since overcoming major burns and brain surgery, Marante is currently enjoying a busy career. Recent engagements include her debut with New York City Opera in the world premiere of Stonewall at Lincoln Center and appearing as Daniela in In the Heights at Broadway Sacramento. She also filmed her first co-star television credit on Bull.

You can learn more about Marante at www.sandramarantesoprano.com.

Dr. Michelle Latour is active as a teacher, singer, writer, and adjudicator and lives in Las Vegas. She has been on the full-time faculties at several universities. She is currently a voice faculty member for the Italian-based summer program, The International Opera Performing Experience and owns a private studio, the LATOUR Voice Studios. You can visit her at www.thelatourvoicestudios.com, Facebook, Twitter, and Instagram.