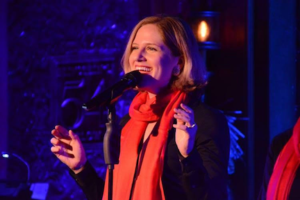 Since graduating with her masters in voice from the Manhattan School of Music, Amy Justman has navigated considerable crossover success singing musical theatre and opera. She has performed on Broadway in six shows in addition to six opera productions and many regional, touring, concert, and oratorio performances. Justman most recently understudied and went on for both Renée Fleming and Jessie Mueller in the roles of Nettie Fowler and Julie Jordan in the 2018 revival of Carousel and performed as an ensemble member of the cast. In this interview with Justman, we learn that even Broadway performers start at square one—or square 1.3—and that you are ever evolving in show business.

What was your first big break? How did that happen? Had you been auditioning for a long time?

My first big break was the Broadway revival of Company. I was about three years out of graduate school when I got the audition, which was mostly due to the music director, Mary-Mitchell Campbell, whom I had worked with on a previous project. This production of Company required the actors to also be instrumentalists, and although Mary-Mitchell hadn’t heard me play piano, the piece we worked on was sufficiently difficult that she must have thought I had the skills to take on the task.

From the day I graduated from Manhattan School of Music [MSM], I was auditioning like crazy, both for musicals and for YAPs. I had some success—by this point I had my Actors’ Equity card and had done one YAP—but I felt like I was running in place. One of my mentors, Carolyn Marlow from MSM, encouraged me to pick one field for a while and put all of my energy into it. About four months after our conversation, I booked Company.

But, honestly, I’ve had a lot of big breaks in my career. You have them, but then you’re back to square one, or maybe square 1.3, when they’re done. It’s rarely a trajectory that only goes up.

What does understudying two Broadway roles at the same time entail?

Lots of highlighters! I’m old school, using a paper script and different colors for each role. Carousel was the fourth time I’ve covered multiple principal roles (Carlotta/Giry in “Phantom,” Clara/Fosca in Passion, and three roles in In Transit), and it has its particular challenges. I try not to concentrate on both roles at the same time, if possible. If I’m walking through blocking or singing through my songs at home, I don’t go back and forth.

The two roles I covered at Carousel had very different feels to them. Julie carried a large portion of the show and had a huge amount of stage time, including a lot where she’s an observer—whereas Nettie was only onstage for maybe 20 minutes, but had to knock everything out of the park for most of that time.

The main drawback these days, with a small child at home, is that when you’re a double cover you’re called to understudy rehearsal almost every time it’s scheduled, leaving less time at home during the week.

What is your process for learning a role/understudying? How do you prepare?

At the beginning, I try to approach it in the same way I would if the role were mine: reading the whole script and score, finding the ways the character is similar and different to me, figuring out motivations, recording all of my lines and music on my phone, etc. Once rehearsals begin, I try to watch the person I’m covering as much as I can and write everything down. Even if I never look at what I write, the process of writing helps solidify it.

There’s usually an archival video made of both rehearsals and the production that the covers have access to, which is hugely helpful. I’ll sit and watch the video, say my lines and sing the songs, and verbally talk through the staging. I try to always be prepared enough to know that I could jump in, even if I haven’t been rehearsed yet.

I’ve found there’s a fine line to walk when you cover in terms of how much to copy and how much to make your own. Obviously, you have to hit all of your marks and not make wildly different choices that would throw off your fellow actors, but you don’t want to do an imitation of them either. Your first time on, you just have to tell yourself, “My responsibility here is not to be great or even good, but just to keep the show and the story going.” If you do that, you’ve succeeded.

Has your opera background helped your Broadway career?

I think certainly having classical voice training has helped me get through an eight-show week and perform well even when I’m not at 100 percent. And I think my work as a classical singer has put me in a certain niche in musical theatre for things like revivals of classic musicals or pieces that specifically call for opera training like “Phantom.” It’s both a positive and a negative in some ways. No one is going to cast me in Mean Girls any time soon, but if there is a musical coming in that requires classical training, I know I’ll have an easier time being considered.

How old were you when you started playing piano? Any other instruments?

My parents had a spinet piano in our house that I started banging around on when I was three or so—making up songs, etc. At some point, my parents taped letters to the keys so I knew what they were and started me on a very basic John W. Schaum piano book. I began formal lessons around seven or so.

I played flute and viola briefly in elementary school and tried to teach myself clarinet after I did Company, but didn’t get very far. I learned vibraphone for the out-of-town tryout of Company and played it in the show, but they cut it for space when we came to Broadway!

Do you still take voice lessons?

Yes, I still take voice lessons with Virginia Grasso, who has been instrumental in helping me transition into more classical repertoire. I owe so much to her—she is an incredible technician. I occasionally go to my former teacher, Andrew Byrne, if I’m working on material that requires more of a belt/mix sound.

To what do you credit your success?

I think I have a combination of being an excellent singer and musician with also being intelligent and a quick learner that has made me valuable. Acting and dancing come less easily to me, and there are certainly people in this business more gorgeous than I am, so I’ve had to find other ways in. But I think people know me for being professional and prepared, while also bringing a certain amount of vocal skill and a warm sound that not every musical theatre singer has.

I’m also a fairly introverted person but with a dry sense of humor once I open up—that comes in handy as well. And, honestly, I think part of it is longevity. Lots of people I auditioned with in my early 20s left the business along the way, but I just hung in there and kept going. There was never really anything else I wanted to do, so thank goodness I’ve been able to make money doing it.

Have you ever felt burnt out? If so, how do you remedy it?

Yes, although never burnt out on performing in general, just on whatever project I happen to be working on. I’ve never felt the desire to chuck it all and be a lawyer or yoga instructor or cupcake baker. And having a family—especially a small child who is averse to sleeping—while trying to pursue a highly competitive career definitely increases that feeling of sprinting a marathon.

I don’t know if I’ve found any successful ways to remedy it other than powering through or just knowing that everything passes, and no one show or job is forever.

What is your dream role in any genre?

I’d love to play Francesca in The Bridges of Madison County (yea for grown-up female characters having romances!) or Margaret Johnson in The Light in the Piazza if a revival of that comes around in 5 to 10 years. Other than that, I’m more interested in creating a role or having someone write one with me in mind.

What is a life goal of yours?

Until I achieved it, my lifelong goal was to be on Broadway. And like a lot of people who actually get to achieve their dreams, the question then becomes, “Well, now what?” My current life goal is to do work that is artistically and financially fulfilling while being able to have time both at home and to travel with my family.

The Reviews Are In! Hear What Others Have to Say about Amy Justman

“For my part, I first came to know Amy as a member of the elite New York City professional choral core. She can ready anything in any language, respond to conducting gestures—in short, she is a total musician. As I began to learn of her solo singing, it has been my great pleasure to perform with her many times. In particular, a Bach St. John Passion at the Cathedral of Saint John the Divine jumps out, but there have been so many opportunities. Amy is a real stylist and excels in early music, Romantic music, [and] contemporary music.” — Kent Tritle, current director of Musica Sacra and the Oratorio Society of New York and director of cathedral music and organist at the Cathedral of Saint John the Divine

“I first became aware of Amy Justman when I saw John Doyle’s revival of Company on Broadway in 2006. A little later, I met her while I was music directing a workshop of a new opera and started asking her to sing my songs. In fact, I started writing songs specifically for her. Amy has a unique combination of skills: a gorgeous and trained soprano voice, a thorough understanding of musical theatre styles, and an authentic and understated acting style. These make her the perfect originator of roles for the kinds of musicals I want to write.” — Katya Stanislavskaya, musical theatre composer, lyricist, librettist, musical director, and educator

“When I was asked to conduct Carousel on Broadway, Amy was in the cast as understudy for Jessie Mueller and Renée Fleming, no less! Her instrument is so gorgeous and flexible that she can do all these things and, because her technique is immaculate, she can do them all healthily. She can sight-sing nearly anything and her musical instincts are impeccable. Working with her as a conductor is a joy.

“And she’s so confident in her own skin that she’s able to be incredibly generous and supportive of everyone around her. It’s one thing to be a great musician, it’s another to be a great colleague. Amy is both. It’s all rooted in quiet confidence. She knows her instrument so well and has such stage savvy that nothing can phase her. She radiates trust.” — Richard Carsey, arranger, pianist, actor, and current conductor of The Phantom of the Opera